Reflections on a year of ambitious digital delivery since Croydon Council hired its first CDO. 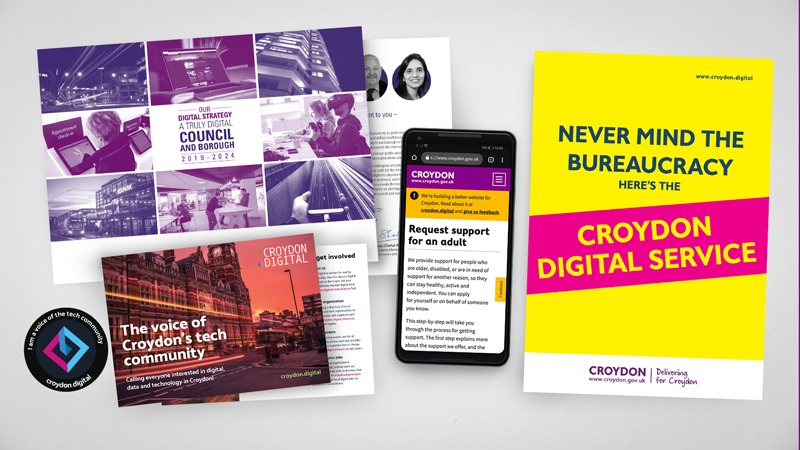 It’s just over a year since I started as Croydon’s first Chief Digital Officer, and coming up to a year since we launched this blog with the words “Croydon is digital and we’re #notmessingaround.”

What a year it’s been for Croydon. New skyscrapers have shot up, St George’s Walk has come down, Fairfield Halls reopened, new music festivals were born, Stormzy headlined Glasto, and Banksy took over a shopfront in town. Against this backdrop of record-breaking Cronxcitement, what’s been achieved in the world of digital, data and technology?

This post shares some of my personal highlights, ambitions for 2020 and reflections on how this first year has felt.

My proudest achievement by far has been creating a new team in the council with the capability, culture and delivery methods needed to transform the council’s systems and services for the internet era.

All other successes – to date and yet to come – flow from this.

Like public sector digital teams the world over, we’re indebted to GDS for the blueprint. But no UK council has been quite as bold in their adoption of it as we’ve been here in Croydon, and some now see us the exemplar for how to marry traditional IT with service manual methods in a local government context. It’s been validating to host visits from a dozen or so other councils wanting to learn about our multidisciplinary team design and culture. Even more so to be finalists for a prestigious award.

We’ve been changing as a team incrementally all year, centralising skills and responsibilities from suppliers and other council teams, removing some roles and creating new DDaT ones. There’s been lots of learning and development for the team, who have been brilliant in their openness to change. We’ve become a more capable and streamlined team as a result, doing much more with less.

My ambitions for 2020 are to complete the team (we’ve got a tiny number of key positions yet to fill) and then make it sing. That means fully embedding agile delivery methods, integrating deeper with council service teams, establishing a rapid but sustainable pace, and getting a much better grip on prioritising our demand which – in the context of a busy council going through lots of change – is proving incredibly difficult to do.

The most visible external change so far has to be the creation of Croydon Digital.

By “Croydon Digital” I mean all of the following: this website (with its blog, listings and growing discover digital Croydon section); the brand and story we’re putting out there about the borough’s digital scene (an evolution of the awesome Croydon Tech City movement); our fab local community of tech workers and organisations from Crystal Palace to Coulsdon; and the programme of Eats, Drinks and Talks events through which we bring them together.

We launched Croydon Digital in alpha nearly a year ago, and took it to beta in July. Traffic to the site has grown steadily and continues to do so. We’re in discussions about a number of exciting inward investment prospects as a direct result of this site’s existence, which commercial sensitivities prevent me from saying more about.

We’ve brought together content from dozens of local tech businesses, raising their profile in the borough and beyond – as well as participating actively in the public discourse ourselves, pioneering new levels of council transparency (which we’re keen to spread by getting blogs going for other council teams in 2020).

I wrote an article for Londonist banging the drum for the Silicon Flyover. We’ve run dozens of events, from fun socials to targeted talks on topics the community most cares about – like selling to government (which went down a storm) and future skills (which has led to work between industry and colleges to address the skills gap).

Notably, we’ve done all this with barely any council expenditure at all other than staff time.

In 2020, my ambition is to get members of the community to similarly donate their time, services and expertise and play their part in running Croydon Digital with us, and potentially explore sponsorship opportunities beyond that. I want to profile the major tech employers in the borough we’re yet to cover – like Home Office, Natterbox, Dotdigital, Focal and HMRC. And I want our events programme to grow bigger and better, with speakers and content that pull a wider audience into Croydon.

In April we started consulting on a new digital strategy, to support the council’s corporate plan. In July, the finished strategy was approved by elected Council members and published.

It is very good. Lots of people have said so.

You should read it.

Wasting no time in delivering the strategy

No sooner was the e-ink dry than we began delivering our roadmap.

The roadmap (still in alpha, so not yet as clear for external readers as we’d like) shows the proactive work we’re doing to deliver the strategy, plus technology projects needed just to maintain the status quo, and reactive work in support of council service teams’ aims. In all the above, we prioritise the work that will have the most positive impact on the most residents – either directly, or indirectly by helping the council run and improve.

A recent count shows 35 of the strategy’s 52 commitments are already in progress, with several now nearing completion. We’re hitting nearly all the indicative dates set out in the document for the highest priority deliverables. We’ve even spotted a few commitments we missed out, for work we’re taking forward that wasn’t explicitly stated.

In 2020 I want to keep a sharp focus on strategy implementation, so we deliver the things that matter most and don’t just react to demand. We’ll begin publishing quarterly strategy progress reports soon on this blog, including adding those missing commitments, so watch this space.

The strategic priority to rule them all is the work we’re doing to overhaul the main croydon.gov.uk website.

See previous blog posts for the background. In short, we’re “doing a GOV.UK” on croydon.gov.uk (predictably given my past!) which means making it easier for residents to get the help they need earlier, more conveniently, online. Alongside, we’re making sure we look after the digitally excluded.

The new site went live last Friday in beta, which means we’re testing it in public all the time while we build it from this point. As I’ve tweeted and Tom has blogged, it’s quietly radical. We are very proud of it – but utterly humble about changing it in whatever ways are needed to meet our residents’ needs.

One of the coolest things about it is that we’re building on open source platform (Drupal) using code developed by Brighton and Hove City Council. With support from MHCLG grant funding our 2 councils and several others are making sure what we each build and learn about user needs can be shared between us and with lots of other councils too.

Moving into 2020, our ambition is for the new site to make a real difference to residents, transforming their relationship with the council, while freeing up council officials’ time to protect frontline services. The new site homepage will supersede the old one by April, and all main sections will be transformed by next December. Alongside, we’ll make headway on digitising more paper forms and clunky offline transactions and improving the ones my predecessors digitised already.

Fixing (some of) the plumbing

Principle 2 of the Local Digital Declaration (which we signed up to this time last year) says:

We will ‘fix our plumbing’ to break our dependence on inflexible and expensive technology that doesn’t join up effectively. This means insisting on modular building blocks for the IT we rely on, and open standards to give a common structure to the data we create.

We’ve taken huge strides forward this year by disaggregating our previously monolithic contract for all the council’s core IT. The resounding success has been partnering with Littlefish to provide tech support the council’s 4,000+ staff. They’ve been knocking it out of the park since they took over our service in May, clocking up world class NPS scores.

Behind the scenes in the council, a vast array of back office systems are at various stages of renewal. We’ve got major programmes running concurrently to replace and improve the systems used for adults and children’s social care, education, housing, council tax and benefits, planning permission and building regs, and regulatory services. We’re also busy migrating off legacy hosted software into the cloud, tightening our cybersecurity, upgrading networks, phone systems and printers in in multiple buildings, and helping council staff use core productivity software to collaborate and work more efficiently.

In 2020, my ambition is to get a clear architectural vision for our many software systems, and a plan to move towards ‘small parts loosely joined’ and shared platforms for common functions. As some in-flight projects land during next year we expect to see benefits in staff productivity and a more joined-up service to residents, particularly in social care.

Finally, while getting set up in the right way and working on larger, long-running projects we’ve been delivering smaller things galore. To list some highlights, we’ve:

For me personally, it’s been one of the fastest years of my life. Croydon is nothing if not ambitious, frenetic and fast-paced – seems us digital folks aren’t the only people not messing around!

I’ve loved it, despite it being challenging at times. The scale and breadth of what councils do means that, even one year in, I’m still on a bunch of steep learning curves all at once. The pace and volume of demand is relentless and all of it matters, a lot. It can be a bit “extra”, as the millenials say.

The first is the sense of community, which Croydon has like nowhere else. I love working where I live, being part of what’s happening, being closer to the users of public services. That’s a thing that makes councils special: they’re full to the rafters with people who care, and I’m proud to be part of team Cronx. I especially love it that I now know so many great people across the borough, who I’ve met in this role.

The second is how exciting Croydon is right now, buzzing with creativity, growth and regeneration. Like the boss says, Croydon gets under your skin. It’s phenomenal to be part of the reinvention of a place – so here’s to another year of #notmessingaround in making sure digital plays a central role in that reinvention.

1 thought on “A year of #notmessingaround”

Brilliant stuff Neil. Can’t wait to see what you do in 2020. Why not merge all the council websites into 1. Now there’s a challenge… 😅