The first steps in the cross-local government discovery into how councils can collaborate on user research. 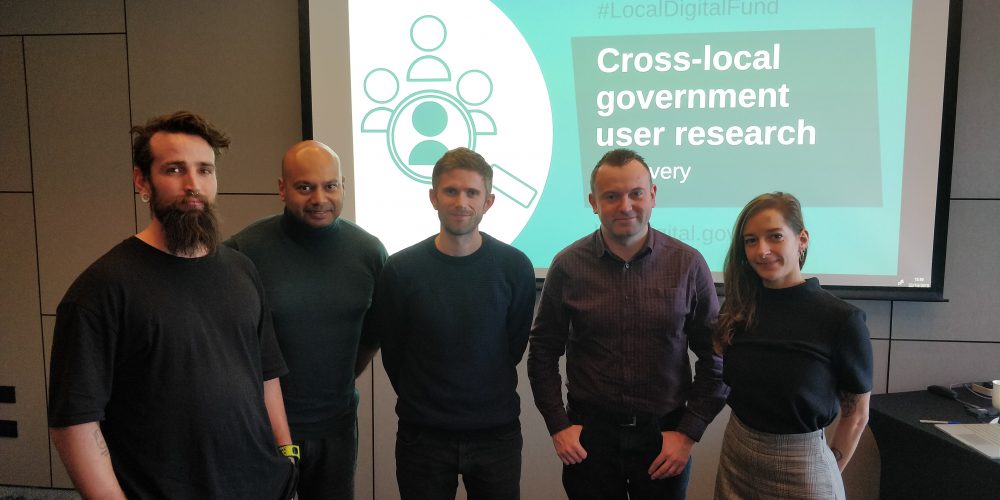 In October 2019, Croydon Council won an application for funding from the Ministry of Housing, Communities and Local Government (MHCLG) Local Digital Fund to support a user research collaboration project with Hackney, Essex, Hertfordshire, and Kent councils.

The aim of the collaboration is to explore whether user research from one council on a statutory service can provide insights that apply to other councils, allowing them to improve the same service without the need to repeat the research themselves. Mira previously blogged about this successful bid and how the local authorities had decided to focus on the journey of applying for adult social care.

Coming onboard as the delivery lead for the project, it was clear from the outset that whilst the actual research taking place would be with service users and staff supporting adult social care, the primary ‘users’ for this project would be people across local government who were doing user research as part of their role.

I set out to understand more about the user needs of people in local government whose roles involved some element of user research. Beginning with the collaboration project team, I carried out one to one interviews with each team member to understand more about their own journey and experience within local government and with user research. In this blog post, I want to share some of the key findings from this initial research and introduce the next steps that we’re taking to validate these findings across local government.

Local government is currently on a digital learning curve

Team members reported a shift in their respective organisations away from business-centred and traditional waterfall-based approaches towards a more agile, user-centred approach. However, this was very much a work in progress, and organisational awareness of user research in a number of the councils was still in its infancy.

“Before the service design team, there wasn’t a lot of requests for digital, we weren’t designing things for the user, we were designing for the business and what was best for us.”

“[The local authority] is very large, grounded in tradition, so it is a bit of a culture shift to get people to engage with user research.”

There seems to be a wealth of education and awareness-raising activity across local government about the role of user research and the benefits of user-centred design. This is happening through relationship management with key internal stakeholders, as well as broader initiatives to reach a wider audience of colleagues from across services and teams.

For example, one team member spoke about how they’d hosted roadshows to publicise user research and how it could help improve the design and delivery of digital services. They came up with some creative ways to get colleagues involved, such as getting people to vote for banners and projecting a heatmap onto the wall. Another team member told us about offering classes during a council-wide education week on accessibility.

Team members said that organisational changes were quite common across local government. They found this could impact user research becoming established, especially if ownership for user research was being swapped in and out of different domains.

“Because I was in such a generalist role [at previous council], you end up doing all sorts, especially with cuts to local government – teams aren’t built with specialisms.”

User researchers tend to start out in other roles

Four out of the 5 local authorities taking part in the collaboration have dedicated user research roles. We think this is very unusual for local government at present.

When exploring each team member’s journey we found many had been at the council for a number of years and moved around, holding a number of different roles. During the course of their local government career they encountered user research, either through exposure to someone else doing user research or needing to do some as part of their role, and this had piqued their interest.

“User research was a small part [of my role], and something I enjoyed, and I wanted to progress my career… I didn’t realise that was something possible in local government.”

“Prior to [my current role], my previous experience was working with the previous user researcher, so I got a little insight into what they were doing with guerilla testing.”

“Probably first exposed to user research at [central government department], they would at times carry out user research with people like myself [as a subject matter expert on the service that they were developing].”

Knowledge sharing in and across councils is important

Knowledge sharing can take a number of forms, but all the team members I spoke to described its central importance in building user research capability within their organisation, at both an individual and team level.

For more established teams, knowledge sharing happened on a daily basis through regular stand-ups, team meetings, retros and working alongside other user research colleagues on projects.

As well as attending formal training, learning and developing as a user researcher happens in a hands on way through working on projects, and can be greatly aided by working alongside someone more experienced who can act as a mentor.

“If one of us goes on training, then at the next team meeting, we do an update on what we learnt, or if at a conference, I put a post up on the Google+ group.”

“A lot of my learning is through working alongside [Lead UR], so I feel like I’ve learnt a lot from his mentorship, how he would approach things.”

Being part of a wider community of people in local government who are developing as user researchers was also highly valued.

“Just meeting other people who were new to it, finding out that there were other people going through the same thing, a sense of community…”

I asked each of the team members that I interviewed to share recent examples of resources or information that they had looked up, to understand more about what kinds of questions they had and also where they were going to find answers.

It was clear in the responses that the real need was around tangible examples, showing how other user researchers had approached a similar problem or topic, rather than more theoretically-orientated resources. People were using resources such as the GDS service manual and the Hackney User Research Library, but also searching more widely online and finding useful information on platforms such as Medium or central and local government websites. They wanted examples of standard deliverables such as research plans and discussion guides.

We want to learn more across the full spectrum of local government, so that we have a clear picture of the user needs and can ensure that we are shaping our outputs from the collaboration project accordingly.

We’re planning a survey to validate the findings from these initial interviews across local government and to identify other user needs that we haven’t so far captured.

We’re keen to understand where councils are in terms of digital maturity and how this impacts their needs in terms of shared user research resources from other local authorities. I’ll be working on the questionnaire for this survey during this current sprint. You can check our progress on our Trello board.

We’re very aware that there are many people across local government doing user research as part of another role. We want to make sure that the survey reaches you, so please leave a comment or email naintara.land@croydon.gov.uk.

Naintara Land is a user researcher and is currently the delivery lead for the Local Digital funded user research collaboration between Croydon, Hackney, Kent, Hertfordshire and Essex councils